The exhibition at the Swan Hill Regional Art Gallery has finished,  and Gilbert Roe and I  decided to add on a photo-camp at Lake Boga when  we  picked up our prints from the gallery. The  photo-camp, even  for a few days,  would allow us to explore the Mallee region  around Swan Hill,  and to build on the new beginnings that had we had either briefly scoped or seen whilst  we were in Swan Hill for the exhibition opening.

I had two large format  scenes lined up from the earlier scoping:  a 5×4 of exposed river roots along  the River Murray and a 5×7 of an edgelands scene near the Little Murray River  on Pental Island.  I also wanted to photograph  the deserted motels around  Lake Boga in the early morning light,   and then some of the shops in the township at Nyah West in the late afternoon.    That was the plan. 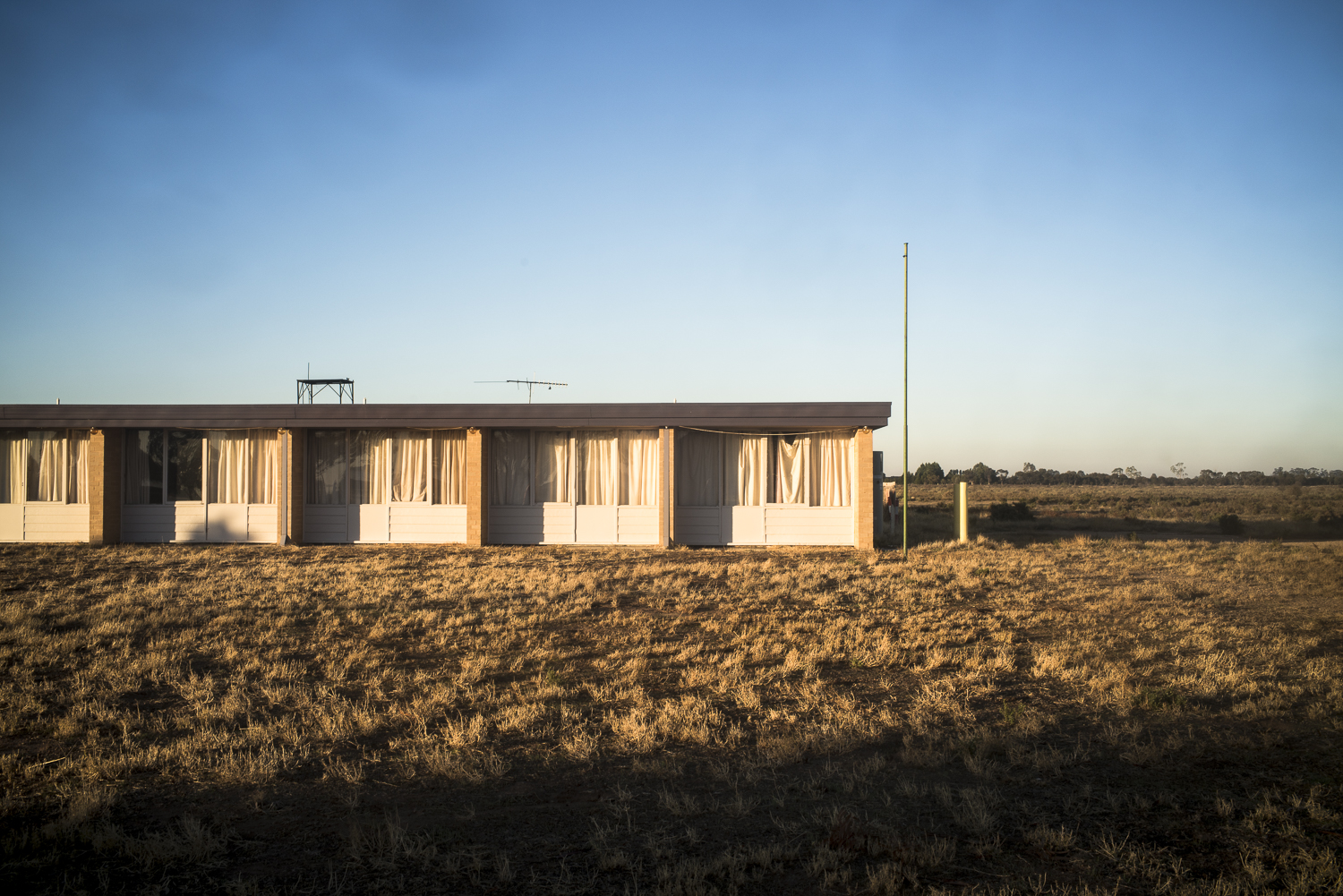 The early morning motel photoshoot with a medium format camera went okay,  but I just couldn’t get it together at Nyah West in the afternoon.

Stuart Murdoch  had photographed around Nyah West when he visited Swan Hill to see the Mallee Routes exhibition. His images  confirmed my impressions from my earlier visit with Eric Algra and Gilbert Roe,    that  this was rich photographic territory.  I reckoned that  I could do some large format work around the township.

It was not to be. There were a lot of people about in the town in the afternoon,  and that threw me.   I had imagined Nyah West  to be an  empty, deserted  town. A ghost town as it were. My  plan  had been to set up the 5×7 Cambo in the main street and  to photograph the empty shops, but all the comings and goings  in cars made that plan rather  impractical. 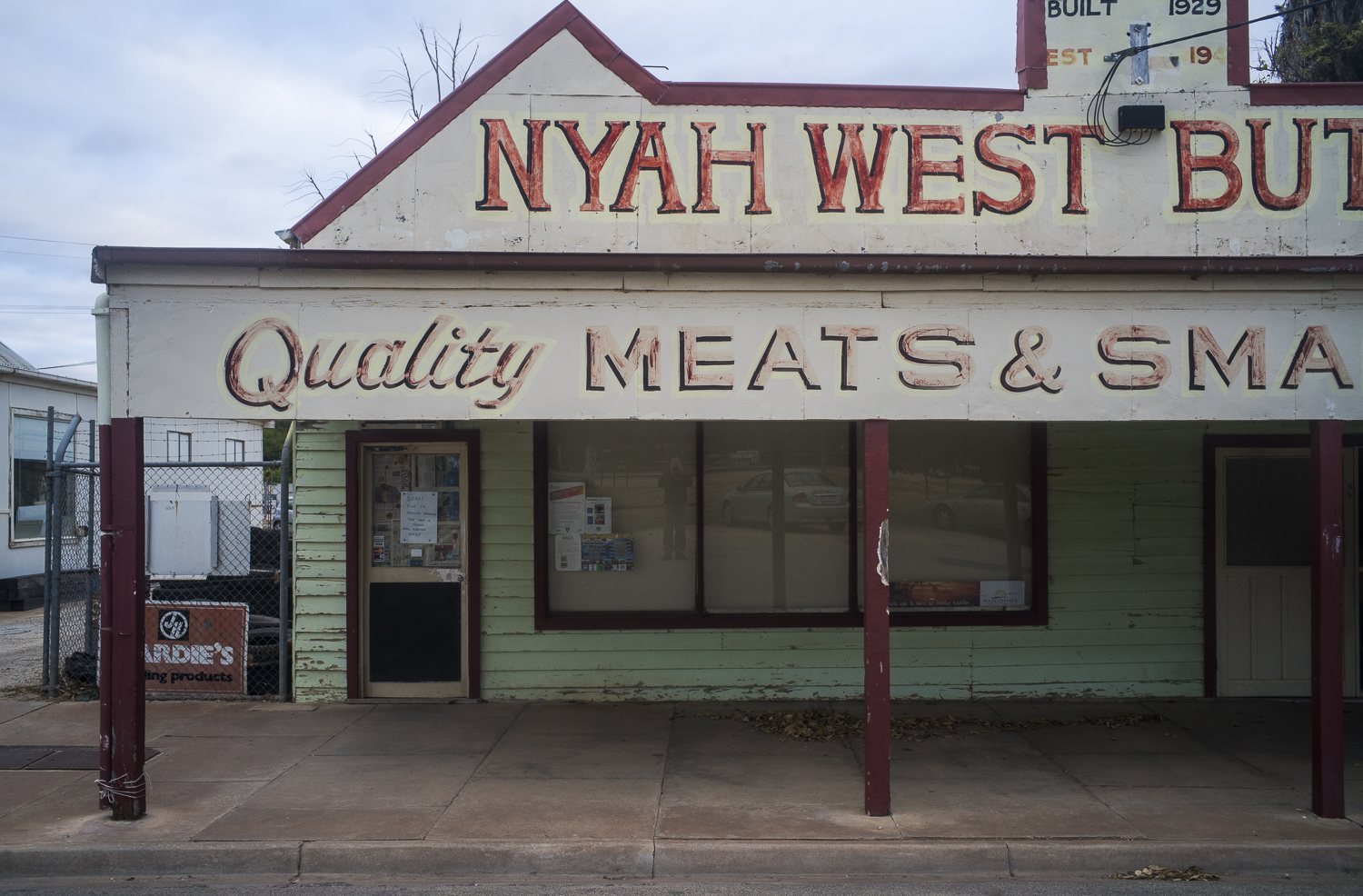 From what I could see people worked in and around Swan Hill and they lived in Nyah West because the housing was cheap. Although most  of the shops in the main street are  empty,  or had become private residencies,  the IGA and the pharmacy were open,  and people came and went there  after school and when they had finished work.

I then remembered that I my earlier  visit to  Nyah West was on a weekend, and that was why the town looked deserted. With my large format photography  plan impractical I ended up walking around the town  with a digital camera for a couple of hours. 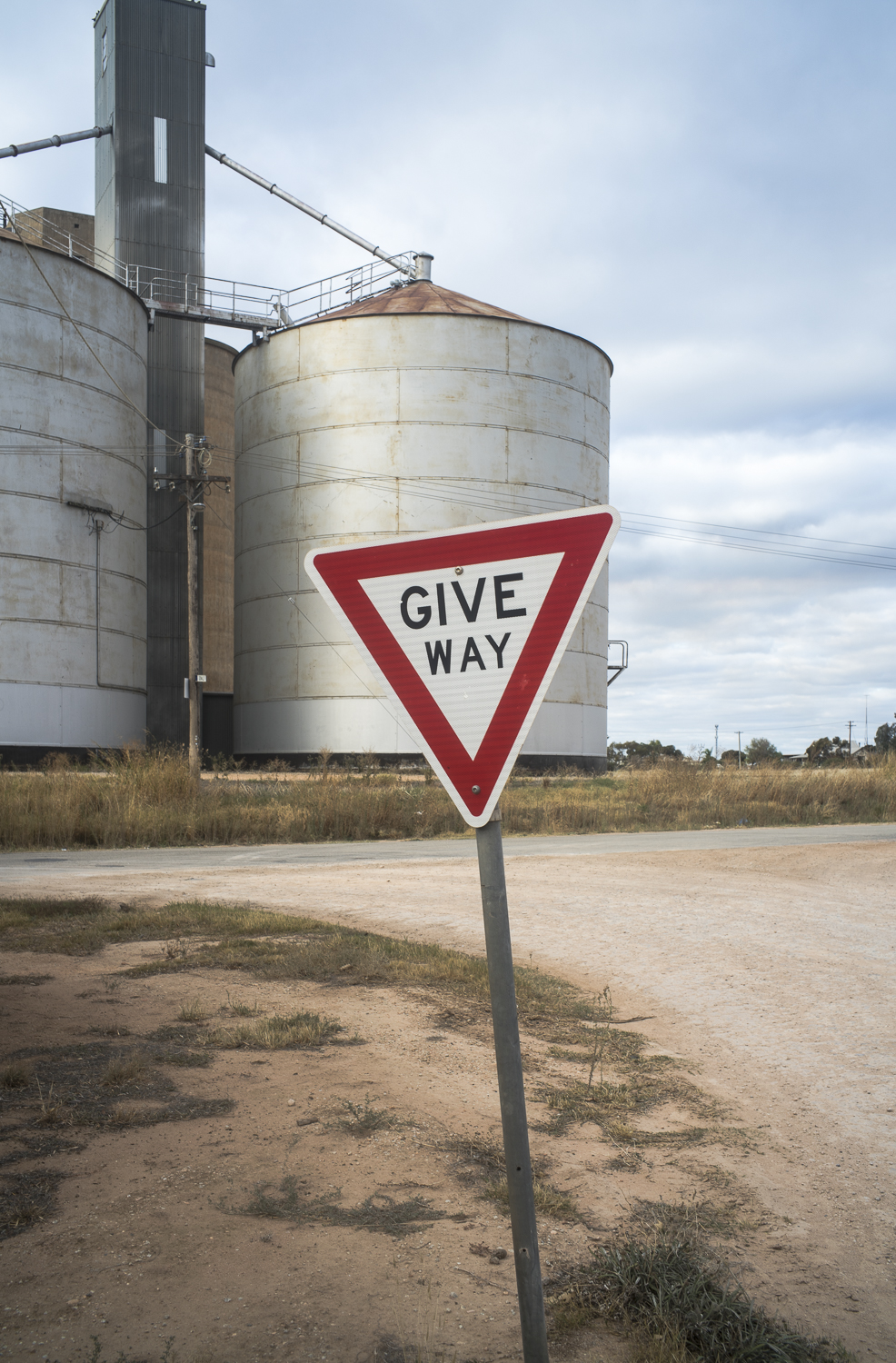 I was scoping for possible locations for a future visit with a large format camera,  to build up my  digital gallery, as well as producing   images  for a snapshot style photobook that would be  a part of  the 2019 Mallee Routes exhibition at the Murray Bridge Regional  Gallery. A photobook  facilitates other means of display and distribution than gallery exhibitions in that  it  allows people to read  the work who would not make it to seen the images in exhibitions,  which are usually  only on for a month or so in a distant location.

The strength of the photobook is that it  enables me to move beyond the  fetishizing of the single image–the ‘one’  of modernism with its essential universal meaning  with its emphasis on  the supremacy of the author’s voice to a visual narrative with multiple meanings.  The photobook places the visual in a  predominant position –as opposed to the text— and it foregrounds how  the imagery of picturebooks is part of a larger set of social, cultural, economic, historical, and artistic practices—a visual culture.