As is well known, the history of the Mallee is one of an extensive clearing of  the Mallee scrub woodland and then substantial engineering efforts  to pipe water across the semi-arid Wimmera region. Whilst searching for photos  for the history gallery,  and  for the historical section of  the forthcoming exhibition at the Swan Hill Regional Art Gallery in March 2018,   I came across some historical images relating to land  clearing and water infrastructure to establish the expansion of  rain-fed agriculture into arid  lands.

These ‘development’ pictures  of the settlement of the wheatlands  show a pioneering settler world that has disappeared into the archives of the state and national libraries. The heavy roller (scrub -bashers) and the subsequent stump-jump plough were 19th century technologies associated with heavy, slow hand labour and peasant agriculture. 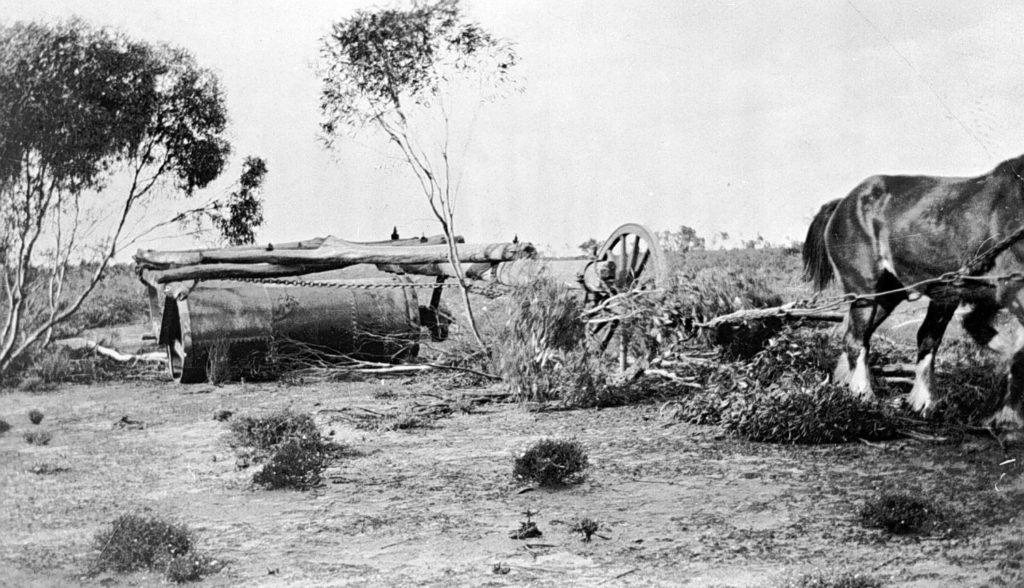 This was domesticating the land—  clearing, settling, organising and establishing and agricultural industry on marginal lands by the pioneering settlers.  They had high hopes  and big dreams for this agricultural  frontier after 1918.  What enabled the agricultural expansion was a big investment in railway networks,  public works and  roads  in the early 20th century.

Once  the marginal land had been  settled and the wheat industry established  technology in the form of  the internal combustion engine  (tractors, cars and trucks) and increased mechanisation made life and work easier by the 1940s.   It was drought that was  the big problem in these arid lands— it occurred in  1914-16, the early 1930s, in 1945-6,  in 1957-9, and 1965-66–and resulted in the failure of soldier settlement schemes, farm bankruptcies, foreclosures and widespread  soil erosion.   Drought, high winds, and constant tillage to increase crop rotation eroded the land and lead to the  widespread dust storms.

Since there are  big limits to rain-fed agriculture in the Mallee there was a pressing need for water. I have previously written about water and the arid Mallee in previous posts—  here and here  and here. The history of water in the early  20th century in these posts is  one of supplying water to the various storage dams located across the region via the earthen, gravity-fed  Wimmera Mallee Domestic and Stock Channel System. This  system extended from the Grampians in central western Victoria to Ouyen and Manangatang in the north, Underbool in the west and Korong Vale in the east.

Whilst this open channel water supply system was critical for the development of agriculture and communities in this region, there was a wastage of water through evaporation and seepage,   and during  the droughts  the Grampians headwaters were under great stress to supply this system. 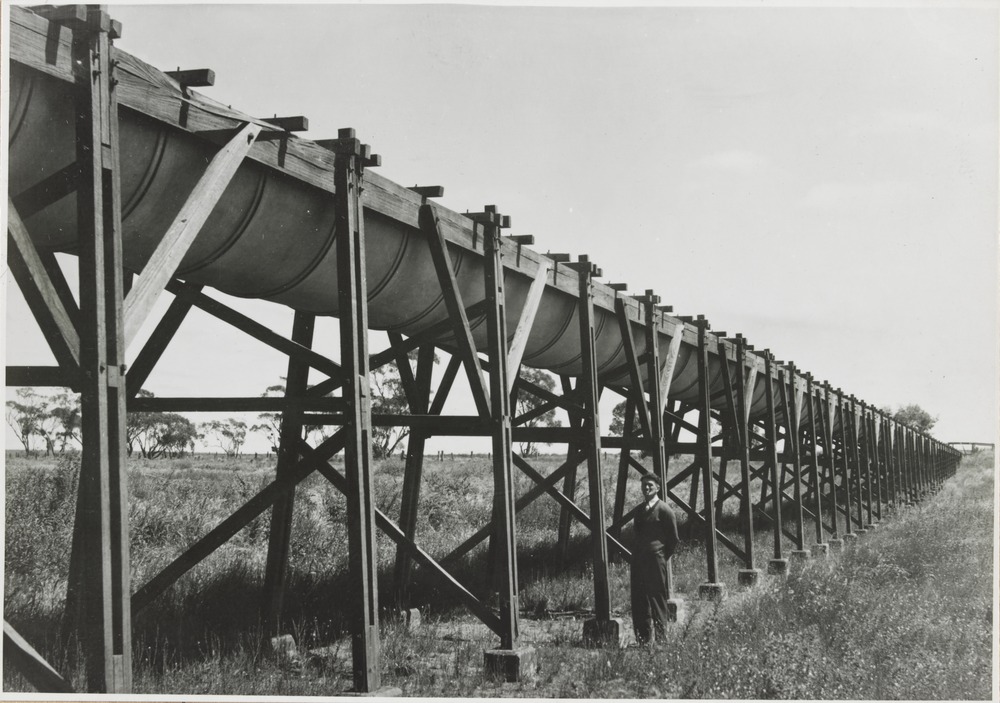 And so we have the colonisation of the country that  established a new mechanical farming system geared to export: one  geared to the mass production of a single commodity, regional specialisation, industrial machinery, large state investment  in infrastructure (railways then pipelines), the heavy use of superphosphate fertilisation and crop rotation and  the increase in farm size.  From the 1960s there was a decline in the rural population, empty shops, decaying social networks,  increasing soil salinity and environmental deterioration.