It was an opportunistic scoping trip. I needed to reconnect with the project after Tasmania, to explore the towns along the Mallee Highway, to reconnect with people in Murrayville, and to assess whether I needed to camp for several days to do the large format photography that I had in mind.

Posted on February 18, 2017 by Gary Sauer-Thompson

One innovative  representation of the Victorian Mallee that I came across whilst on the Hopetown phototrip  in 2016  was the murals that were being  painted on the silos throughout  the Victorian  north-west Mallee. One  notable example was the mural on GrainCorp’s disused silo at Brim,  which  had been  painted by the Brisbane street artist Guido van Helten  in collaboration with the local community. This site  has become a tourist icon in the Wimmera,  judging by the number… Read More

Posted on December 2, 2016 by Gary Sauer-Thompson

I took the opportunity to make a  side-trip into the  Victorian Mallee when  I was transporting  the prints from the Weltraum and Abstraction x 5 exhibitions to my fellow  photographers—Stuart Murdoch, Judith Crispin and Jeff Moorfoot-— to the pick-up points of the Ballarat/Lyonville meet up near Melbourne. It was a quick side-trip. I  drove north-east  from Horsham into the Wimmera-Mallee passing  through Jung, Murtoa, Rupanyup and Marnoo to St Arnaud,  before then driving… Read More

Posted on November 20, 2016 by Gary Sauer-Thompson

With the initial exhibition of the Mallee Routes project Atkins Photo Lab finishing at the end of November I interrupted the archive project I was working on  to go on a  photo roadtrip to Hopetoun to  build up my archive for the next  exhibition, which has been planned  to take place in 2017.  Two  overcast days after a big  storm  provided me with an opportunity to  spend several days in the Wimmera Mallee,… Read More

Posted on October 1, 2016 by Gary Sauer-Thompson

I noticed  this silo  when I was driving from Lameroo to Karoonda  on my way back to Victor Harbor after the silo photoshoot at Lameroo.  It was  near  a little hamlet or settlement called Kulkami in the southern Mallee.  There was no railway line near the silo. It was late in the afternoon  and the burst of sunlight had gone by the time that I’d  walked around the fenced  area to find  the right position or perspective  to photograph… Read More

Posted on September 26, 2016 by Gary Sauer-Thompson 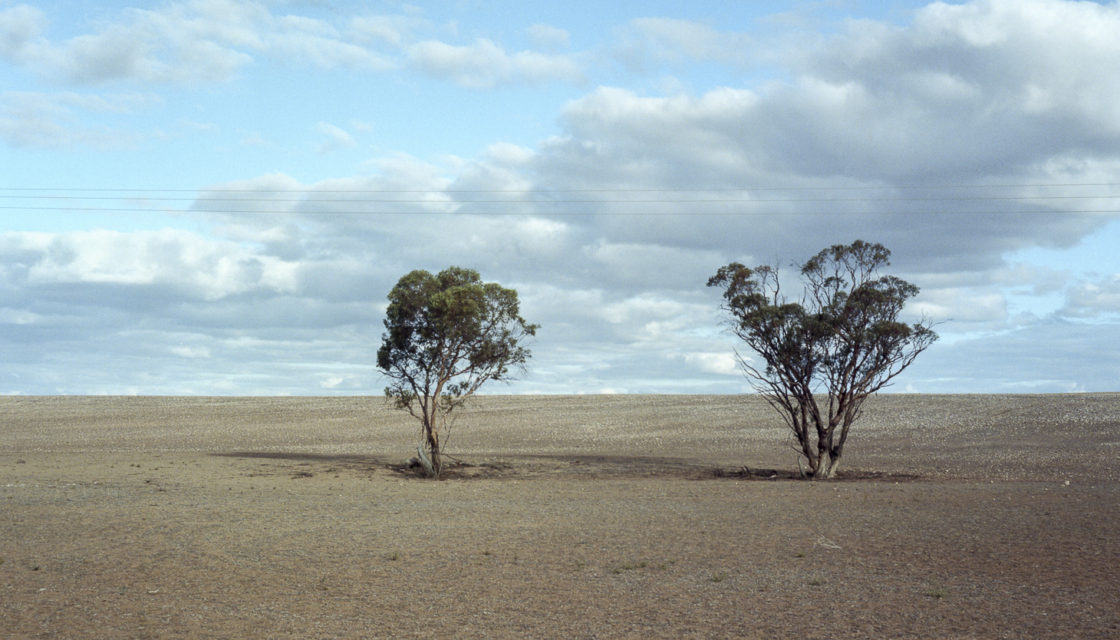 The  images   in this  portfolio  explore the space /place dialectic  of the South Australian and the Victorian Wimmera Mallee. They  were made  during the collaborative Mallee Routes  of the project  (2017-2019),  then  the  second solo phrase of the project Eye on the Mallee.  The  film cameras that were  used were  primarily  medium and large format (5×7 and 5×4).

Today these war memorials embody the Anzac Legend, which continues to lie at the centre of Australian identity. The Anzac Legend holds that Australian War Memorials represent the soul of the nation. The Legend’s current function and place within Australian culture is that of a creation story: it distills the Australian identity in one historical moment–the nation was born on the battlefields of Gallipoli. It is a creation story— nations are made in war—-but one that excludes the Frontier Wars in our Anzac Day commemorations.

Posted on September 19, 2016 by Gary Sauer-Thompson

Although it is the grain silos along the old railway lines that dominate the landscape in the Mallee, the odd-looking, elevated water towers also stand out in the regional landscape.

Posted on September 16, 2016 by Gary Sauer-Thompson

The decaying and empty houses in the dying small towns is one of the most obvious features of the Mallee in South Australia and Victoria, and it is largely the result of the de-population of the inland countryside that started in the late 20th century around the 1970s. An era was coming to a close.