In a previous post I mentioned how  I had reconnected to  an old  photo trip  that I made in the 1980s in the VW Kombi to  Mantung and Galga in the South Australian Mallee. However,  I didn’t  mention that I had some re-photography possibilities  in mind.  On the earlier  trip  I  made several black and white photos with a large format camera ( these are in my film gallery on the Mallee Routes website), and I was wondering whether  it was possible/feasible to re-photograph the sites and buildings  that I’d photographed in  the 1980s?  If it were feasible,  would it be worthwhile doing? If it were worthwhile,  what would re-photography mean in the context of the Mallee Routes project?

These questions were in the back of my mind when I was at  the Loxton photo camp in late April  and I was exploring this area of the South Australian Mallee.   I returned to the particular places I had  photographed at Mantung and Galga in the 1980s to see what remained, what had disappeared, and what could be re-photographed. In particular I  was looking for this old,  petroleum storage shed  in Galga: 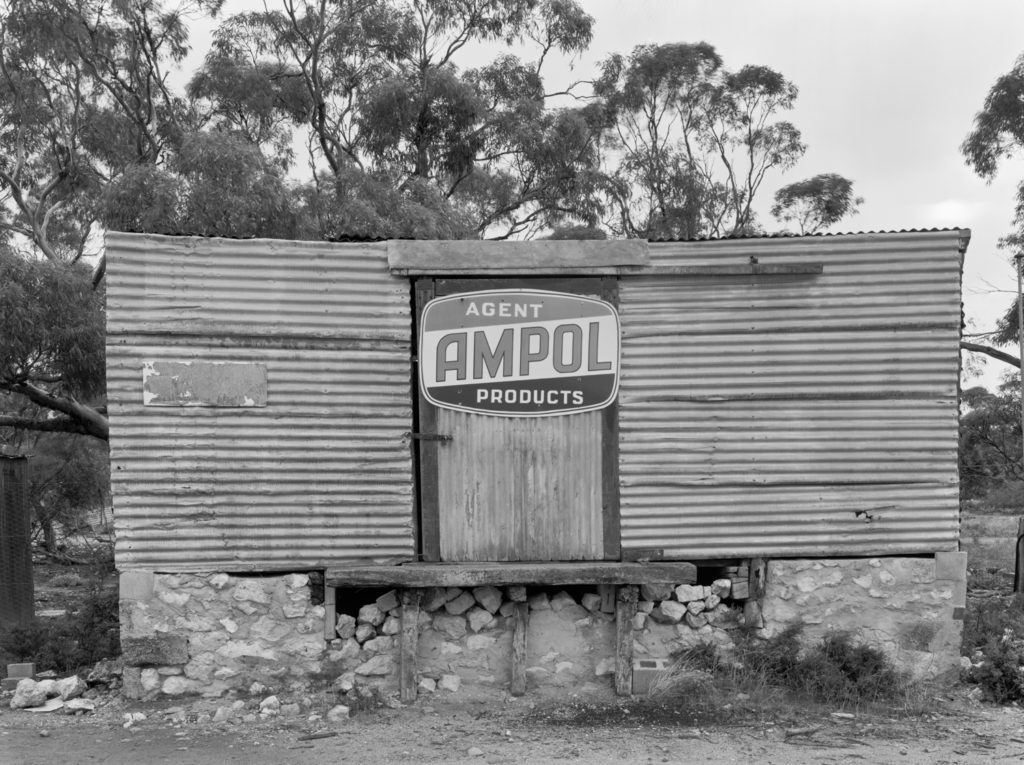 Rephotography is the process of photographing a picture again after a period of time has passed. In the past 40 years, there has been a large increase in use of rephotography within artistic and cultural projects around the world. They are usually  designed to  better understand change to the landscape over time.  These days the internet is awash with software-aided ‘computational rephotography’, augmented by Photoshop, such that ‘then’ and ‘now’ have been mashed-up, transposed and composited like never before. My approach, in contrast,  has its roots in the pre-digital  re-photography of  the 1970s/1980s.

What I had in mind is  the Second View: Rephotographic Survey Project (1977-79) undertaken by Mark Klett,  Ellen Manchester and JoAnn Verburg (with assistance from Gordon Bushaw and Rick Dingus)  relocated and re- photographed one hundred and twenty sites in the American West that had originally been photographed a century earlier by Timothy O’Sullivan, William Henry Jackson, John K. Hillers, Andrew J. Russell and Alexander Gardner during the government survey expeditions to the region.

An Australian rephotographic project is  Judging Architecture: Issues, Divisions, Triumphs, edited by Philip Goad. The  project was devised in 2002 by John Gollings and David Pidgeon, who conceived of a book revisiting, re-judging and, importantly, rephotographing the best buildings from 75 years of Victorian Architecture Awards – from 1929 to 2003.

Whilst walking around the  deserted  hamlet of Galga I eventually stumbled across what appeared to be an abandoned  house with lots of  old farming machinery scattered around its  yard.  The scene  looked familiar. My memory was jogged.  Then I saw the shed,  and  this is the picture I made with my digital camera: 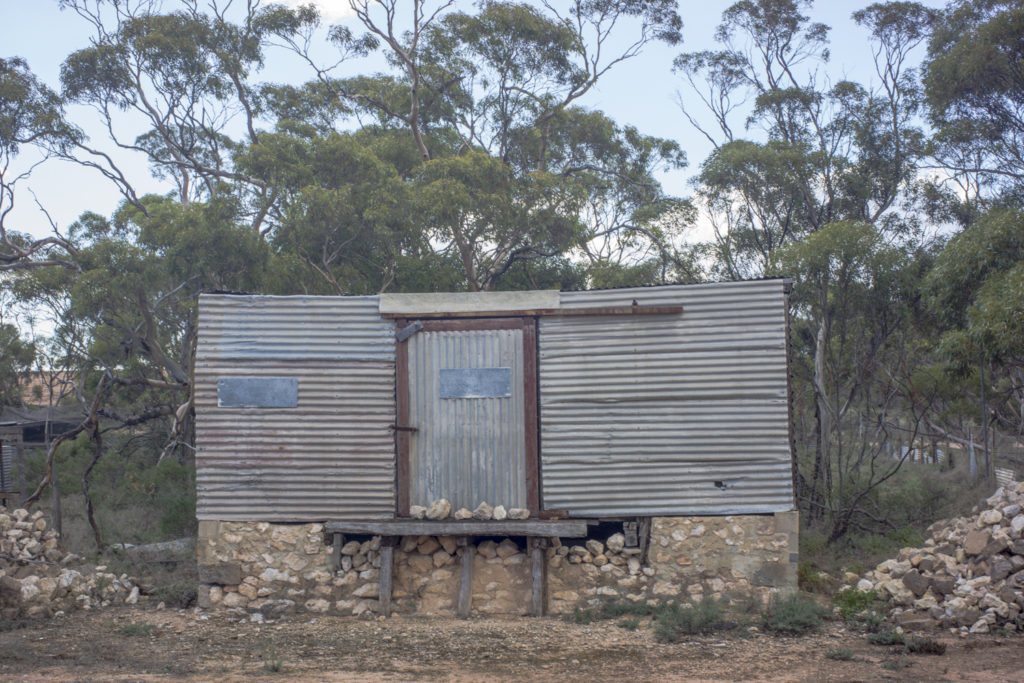 The two photos  give us  a ‘then’ and ‘now’ that provides a perspective on the strata of time. The above  mentioned rephotography projects indicated  that rephotography is greater than simply tracking change,  as  the various places are cultural sites whose significance comes from an accumulation of human interventions, interactions and imaginings. Re-photography’s  then and now helps to enrich the  history of a place.
Remembrance is a very strong component for me,  since  this part of the Mallee made a strong impact on me when I visited it in the 1980s.  I’d never forgotten it,  and as I slowly became aware of the differences between the South Australian and Victorian Mallee I felt the need to re-photograph the old sites as a way to start to represent the Mallee’s history.
So  how would I re-photograph  the old shed? Unlike Melbourne’s iconic buildings  this shed  wasn’t designed  for history.  However, if  photography is like  architecture in that  it freezes a moment in historical time, the memory of that  moment is also about space/place  as well as time. Memory cannot be understood independently of the place in which memory is located.

So I wasn’t really interested  in the understanding  of re-photography that places the emphasis on mathematical accuracy. The re-photographer, on this account,   determines the season and the time of day from observation of the vegetation and the shadows shown. They  set up  a similar type of camera at the original viewpoint, at approximately the right season and time, and wait with the original view in hand, until the shadows reach the same positions relative to surrounding objects. The aim is  extreme accuracy in the sense that  it should be possible to place one image over the other, and see the edges of buildings match exactly.

What is the point of  constructing exact replicas through juxtaposing the original views with a second view taken decades latter?  It appears to be almost a parody of scientific accuracy.  That aligns  photography with scientific positivism, which is at odds with the significance of the memories of my experience of the Mallee in the 1980s. Memory is no less tied to space/place as well as time.

Memory is what motivated my reconnection to the old locations.  So the re-photography is more personal than the  value neutral objectivity in the scientific sense. The second view photography is a form of remembrance and the overcoming of forgetting.   Remembrance is also a return, a coming-back, or a re-placing; a placing back into that which we never really leave. Place imparts a ‘fixity’ to memory that memory would not otherwise possess.

If the landscape is layered with the effects of land use and social life,  then  the photographs become interpretations of this layering within a cultural context?   The second view  photograph then re-signifies  the viewer’s relationship  to the Mallee landscape and the past it represents. This construct means that the Mallee landscape becomes more textual and discursive,  and so  it counters the traditional representation of  the landscape as a framed pictorial entity that can be viewed at a single glance.

That is the rationale. Would I  now go back and re-photograph the shed  with my large format camera?

← empty landscapes
The Mallee and the pastoral →